In a world increasingly mediated by technology, environmental decline, the rise of extremism, and where groups of people are systematically oppressed – be it for their colour, sexuality, or beliefs – the idea that magic could permeate our daily lives feels a little infantile. Magic, or so the modern world would suggest, is the stuff of childlike dreams, fantasies, and fairy tales. This feeling however, is a product of the erasure of traditional forms of knowledge and can be directly linked with the imposition of Eurocentric ideals, Christianity, colonialism, and the oppression of women worldwide.

Magic was and has always been women’s work. The knowledge required to cure illness with plants, to change moods with herbs, and to know exactly which mushroom would connect you to other planes of reality was traditionally the purview of the witch. Within the prevailing western cannon witches eat babies, possess distinctly unattractive features that can only be altered by glamour spells, and make deals with the devil in exchange for their power. Witches, and their magic knowledge, have been the singular focus of attention for those that have wanted to equate female empowerment to evil.

Silvia Feredici’s (2004) seminal work looking at women, witchcraft, and the body traces a clear line between the systematic oppression of women, the discrediting of their traditional knowledge, and the rise of modern-day society. Her thesis is quite simple, that the suppressing of women’s knowledge – especially in relation to healing and reproduction – was carried out under the guise of the witch hunt and the threat of heresy. The simplicity of this premise warrants further attention. The idea that magic is purely a feature of devil worship or a sign of evil is only present when magic is linked to the feminine. High magic, that is male magic, has always had a place of value in the western tradition. One such example is the figure of Merlin, an integral part of the Arthurian myth a foundational myth in western culture, who is presented as of the greatest wizards of all time and is hardly ever the villain in the story.

The suppression of magic, and of women, can also be seen in the history of the American colonies. In the new colonies, women of all kinds were made illegal by virtue of their mix race or through slavery. The upside of these legally drawn lines of segregation was the mixing of magical traditions; African, European, and Indigenous traditions blended and became impossible to eradicate despite the many attempts to suppress them (Feredici 2004). The question of why magic and traditional female forms of knowledge were eradicated with such determination looms large. I have hinted here, based on the work done by Feredici, at the desire to systematically oppress women so they would comply with the new modern forms of nuclear family set ups and increasingly intensive forms of femininity. However, these political dimensions alone do not answer the question completely.

At the centre, at the heart if you will, of magic there is an animistic conception that brings together, unifies, matter and spirit (Feredici 2004). Magic or witchcraft, unlike traditional Judeo-Christian systems of beliefs, presupposes a high degree of unity between parts. This unity is the quality that allows for magic to travel between beings and to be present in all of them. Magic does not allow for a Cartesian separation of mind and body, of nature and reason, magic at its core is a unifying force that democratizes power and knowledge providing anyone with the desire to know the possibility of knowing. This notion is antithetical to the Eurocentric notions of hierarchy, rank, and religious externalisation that have been so pervasively spread thus far.

More and more we have witnessed the reclaiming of magic in the modern world. Perhaps one of the most famous artistic examples of this is the magical realism movement. Originally a literary movement is has spread worldwide. Magical realism attempts to both normalise magic in everyday life and highlight its presence. According to Mrak (2014) the conventions of magical realism have the potential to disrupt Eurocentric notions of identity, reality, meaning, and truth. By incorporating elements of magic into the narrative the idea that there is a singular reality to be represented is eliminated and replaced by the potential of the unknown. While most magical realism has centred on literature the basic tenants of unravelling Eurocentric positivistic notions of reality can be applied to all forms of art making.

The creation of a body of work that refuses to comply with the constraints of reality is a defiance to the notion itself. By incorporating elements of folk magic, the artists are not only defying the notion of reality, but they are reclaiming forms of knowledge that have systematically been discredited by the Eurocentric tradition. As Mrak (2014, p183) argues “magical realism shares with transnational feminism the potential of decolonization and of rendering marginal voices and realities. In its literary capacity the devices used can disrupt fixed categories of truth, reality, and history”. Artistic expressions are ideally situated to play with the malleable borders of reality, but it is the artist who must make a choice to actively push against those boundaries.

Even within the playful spaces of artistic creation the feminine has mostly been represented in one way: the muse. Women in art are “in” art. They have not always been able to create it therefore reducing the magical elements associated to the feminine to the mere representation. This portrayal of the feminine as no more than an image has taken away the depth that those mythologies once had. Unless the artist decidedly brings magic into art as a form of disruption and recognition it continues within the classic tradition of representing the mere image. In other words, the new feminist artist must be the witch that she is representing, and she must return those images, and the knowledge associated to them, to their rightful place as valid forms of knowing and experiencing the world.

The reclaiming of magic is then, not only, a call to unity but also to the recognition that traditional forms of female knowledge, that were rooted in the natural world, are as important as the male-dominated and male-centric spheres of knowledge that have been created in the last few centuries. The presence of magic in everyday life is a reminder that a choice is to be made in assigning value to the ways in which we interact with world. Choosing to disrupt our positivistic experience of the world with the marvels that come from nature is to disempower the narratives that bind us.

You are cordially invited to Arcana Exhibition: 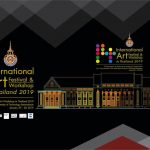 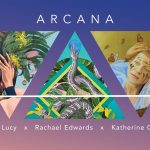